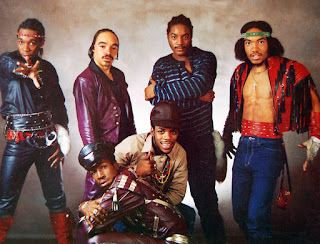 It was just the D.J. playing music for the neighborhood. These parties were affectionately known as block parties, or more commonly “the jam”. This could have been any urban city in America in the early 1970s but in New York the D.J’s were not only playing the popular music of the day, they were broadcasting the more obscure cuts from popular albums that the radio wouldn’t dare touch, and the more daring D.J.s were playing unknown music by unknown groups altogether. A microphone was always present at parties for announcements and such, and as a result the D.J. was the original M.C. (master of ceremonies). Whether he or she was simply making an announcement, telling Jimmy to move his car or asking the party people how they felt, the D.J. was the host.

At some point many years before anyone had uttered the words Hip Hop in rhyme form or to describe a culture, D.J.'s started to speak in rhyme over the breakdown parts of records where no one was singing, and the percussion was heavy. Radio disc jockeys like Hank Span, Jocko and Gary Byrd had been performing this “Jive Talk” over music for years. The late great Pete DJ Jones – a Bronx D.J. who played for an adult crowd at some of the more sophisticated New York clubs, told me that he started to take 2 copies of the same record and manipulate them on two turntables in an effort to extend the length of the songs, because he had to play 6 hour parties with a limited supply of music. D.J. Kool Herc - the man credited as the Father of the Hip Hop subculture, was extending breakdowns of records as well with a different motivation.

Kool Herc noticed that the energy of the crowd greatly increased at the breakdown part of these records, but the breakdown was only seconds long. Herc extended these breakdowns because he wanted to provide a sound track for the fraternity of young people who danced to these chaotic breakdowns (these dancers were coined B Boys and B Girls – later Break dancers).Herc also had his own assistants and M.C.’s – Timmy Tim, Clark Kent and Coke La Rock. 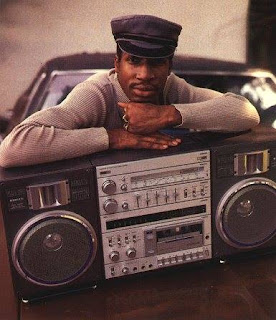 A young D.J. named Joseph Saddler code name Grandmaster Flash was a student at Samuel Gompers Technical school in the Bronx. Flash was intrigued by the concept of extending instrumental parts of records, but Flash was literally a scientist. Grandmaster Flash would drag electronic parts from junk yards and build speakers, modify echo machines and mixers and repair his already existing equipment. Flash saw what Herc was doing with 2 copies of a record and 2 turntables, but he felt that Herc lacked precise timing that left the dance floor in disarray. Flash was devoted to improving on what Herc was doing, and he actually developed techniques like the clock theory to perfect what he felt Herc lacked. Flash also built his own cue switch and glued it onto his mixer so that he could hear the next record in his headphones before he debuted it to the public. Flash greatly improved upon what Herc was doing at his parties, and he amassed a huge following in New York, specifically the Bronx. Along with his assistants, The Disco Bee and EZ Mike The Grandmaster Flash show was something to behold according to those who witnessed it firsthand.

When he played to the public, mostly at neighborhood parks (these parks were actually the asphalt playgrounds of various New York high schools – 23 Park was Flash’s home base) he described the scene as a seminar. No one danced, they stared in amazement at his new D.J. techniques. Flash attempted to speak over the records like many other D.J’s but he hated his speaking voice, so he made his mic available to anyone who could entertain the crowd. Many tried but all failed except one – the late Keith Wiggins later known as Keith Cowboy. Keith Cowboy was a master M.C. with the control of a ringmaster who specialized in crowd participation. Keith would ask the crowd what their favorite designer jean was, what they thought about the basketball game the night before, and he is credited as the inventor of the staple of crowd participation in rap music – the still utilized “all the ladies in the house say oww/all the fellas say ho/throw ya hands in the air and wave ‘em like you just don’t care”. Cowboy was the answer to Flash’s dilemma, and he soon became Flash’s first  M.C. Many consider Cowboy the first M.C. in the genre. Cowboy is also credited with developing the phrase Hip Hop, which Afrika Bambaataa would later use as the name to identify the sub culture of Mcing,Djing,B Boying and Graffiti writing. 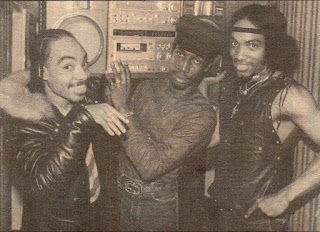 Brothers Melvin and Nataniel Glover, inspired by the poetry of their older sister Linda and Herc’s  M.C.’s Coke La Rock and Timmy Tim started to experiment with a back & forth style where they split words and phrases between each other. Melvin and Nathaniel would later become Mele Mel and Kidd Creole, and after perfecting their routines, the Glover Brothers began to hop on the mic at the parties of Bronx D.J.’s who had sound systems and gave parties. It was inevitable that Mel & Creole would cross paths with Flash & Cowboy, and when they did one of the first and most influential rap groups was formed – Grandmaster Flash & The 3 M.C.’s. The difference in the 3 M.C.’s and others who rhymed at the time was a matter of style. The “Jive Talking” D.J.’s like Hank Span and Jocko didn’t rhyme on the beat, or as the great D.J. Hollywood describes it “in syncopation”. The MC’s/D.J.’s like Coke La Rock and Timmy Tim were not saying full rhymes, they were saying phrases and fragments and they weren’t on the beat. They were rudimentary like nursery rhymes. The 3 M.C’s were saying full rhymes in syncopation. Kidd Creole says that the first person that he ever heard say a full rhyme about themselves in syncopation was his brother Mel. Scorpio said to me confidently “if it’s one thing that we own the patent on, it’s saying full rhymes on beat”.

Eddie Morris aka Mr. Ness was best friends with Mele Mel, in fact they were in a break dancing crew together and they once danced against Mean Gene (Grandwizzard Theodore’s older brother) and Grandmaster Flash. Eddie (who eventually changed his name to Scorpio because he was getting so many girls that he called himself a stinger) was always in the company of Grandmaster Flash & The 3 Mc’s and he eventually became an M.C. himself and joined the group forcing a name change to the Furious 4. Scorpio affectionately known by those close to him as Scorp, says that at one time only a rope separated the crowd from the rappers at a jam. He says that Grandmaster Flash and The Furious 4 built the first stage in Hip Hop, where they were elevated over the crowd. 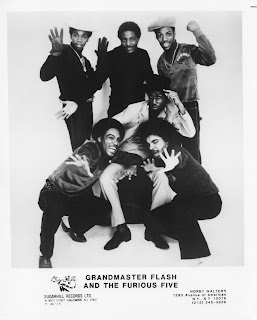 At the end of 1979 there were over a dozen rap records. Bobby Robinson in Harlem and Sylvia & Joe Robinson in New Jersey owned and operated Enjoy! and Sugar Hill Records respectively. Sylvia Robinson discovered and signed The Sugar Hill Gang and released Rappers Delight in September of 1979 – the first commercially successful rap recording in the history of the genre. Grandmaster Flash & The Furious 5 released 2 records in 1979: We Rap More Mellow (under the name The Younger Generation on Brass Records) and Superappin’ on Enjoy Records. As part of Sylvia Robinson’s effort to monopolize rap as a recorded medium she bought the contracts of most of the rap artists on Bobby Robinson’s (no relation to Sylvia & Joe) Enjoy! label including GMF&F5. Grandmaster Flash & The Furious 5 enjoyed a run of hits on Sugar Hill that included Freedom, The Birthday Party, Flash To The Beat, Showdown , Its Nasty, The Message and The Message full length album. The Message, written by Sugar Hill house band percussionist Ed Fletcher aka Duke Bootee was the song that splintered the group forever. The Message is credited as the rap recording that introduced social consciousness into the genre, and no one wanted to record it, stating that it was too dark and depressing. Sylvia finally convinced Mel to record the song along with Fletcher, effectively birthing a solo career for Mele Mel. Mel recorded The Message II and New York, New York with Fletcher as well and the records were still credited to the entire group.  The group splintered into 2 separate groups not long after, and Mele Mel added the title Grandmaster to his name. After the name change Mel achieved commercial and critical acclaim with Beat Street Breakdown, Vice (from the Miami Vice soundtrack) and White Lines. The group has reunited a few times over the years, but they were never able to rekindle the magic of the glory days. 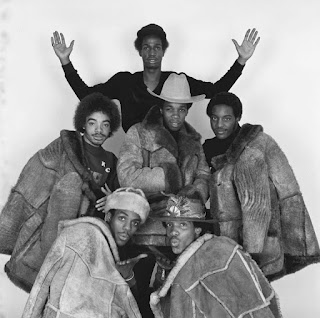 The influence of Grandmaster Flash & The Furious 5 is undeniable, especially amongst their contemporaries. They were the only group from the era before rap records to be able to take their D.J. on tour after signing a record contract. Flash was that important to the group and their live show. Sugar Hill records vocal coach, percussionist and vocalist Craig Derry says “Flash literally set the template for the D.J. to play arenas. I watched him explain to the sound men that they needed a quarter inch plug to connect his turntables to the arena’s sound system. Now its standard for D.J.’s to play arenas as an act. No one did it before Flash”. Cowboys call & response, Mele’s social commentary and use of metaphor, Creole’s mastery of the echo chamber and “yes yes y’all” segues, Scorpio’s flamboyance and futuristic style of dress and swagger before it was a word in Hip Hop, and Rahiem’s unique cadence and singing abilities (he sang 2 ballads on The Message album) made this group an unstoppable force. The Library of Congress archives, Grammy Hall of Fame, Rock & Roll Hall of Fame (first rap act ever inducted) and now the Grammy Lifetime Achievement Award. You have to see to believe. I saw and I bear witness. Congratulations Gentlemen.
Posted by JayQuan at 6:47 PM